Ever have an automated process just suddenly stop working even though you’ve made no changes to the process? There’s nothing like the pure adrenaline of debugging why no one’s commits are getting deployed to production for a critical fix and yet everything is reporting “green”. Of course, there were little things that could get fixed, but those things were just distractions at that moment. Everyone had an opinion of what was going on and just wanted it fixed now! While I had the most seniority within the operations team, some expressed that it was the lack of my expertise causing the problem. That did give me a clue towards finding the problem. Something HAD changed. The engineer who had set up the CD pipeline had recently left. A little sleuthing, and I realized that he had used his credentials to get the automated deploy to work… so when he left, his credentials got disabled and it just failed silently.

When writing scripts for automation or building out a service, don’t run under your own credentials. This creates a single point of failure on you for the service. It’s also good practice to separate out concerns between environments. This way even if someone accidentally runs a test command against production, it won’t have disastrous results.]

One recommended approach is to use service principals. An Azure service principal is an identity for use with applications, services, and tools to access Azure resources. Using service principals allows us to assign specific permissions that are limited in scope to precisely what is required so we can minimize the impact if it’s compromised!

We get the az command which has a lot of different functionality. We’re going to focus on managing a service principal for this article. First, we need to login.

If the CLI can reach a web browser, it will open it up and have you login. Otherwise, a URL is provided from the command line to visit along with a code to enter into the sign-on page.

Depending on your usage of Azure, you may have different subscriptions. Before running commands in the CLI, it’s useful to check out your subscriptions using az account list. I added -o table to get easier for me to read output versus the default JSON output. Here is a modified version of my output showing that I’ve got 2 accounts, one that is my Pay-As-You-Go account that I upgraded after my Azure Free Account expired, and one that is my work-related subscription.

I want to make sure that I use my “Visual Studio Enterprise” for this walk-through so I’m going to set my subscription explicitly.

Next, I want to manage the service principal. I can get more information about an Azure CLI command before running it by adding a -h flag.

Breaking this down into its components I’m using the az cli, with the ad option for Active Directory and the sp suboption for service principal.

Without specifying anything extra, Azure will generate and provide a random password for my new service principal. 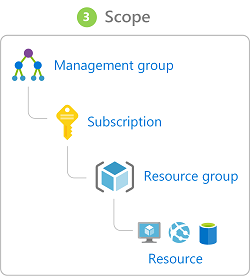 In this diagram, from the top to the bottom we have the most to least access in terms of scope to resources.